​WHY DO I HAVE A BACKFLOW PREVENTION ASSEMBLY?
Residential Home:  The most common reason for having a backflow assembly for your home is because you have an irrigation system.  There are other reasons not as common such as a Well on the property or you have a business on the property that deals with chemicals or other toxic substances that can get into the consumable water.

Your landscape has all kinds of nasty things in it that will make you sick or worse if you drink them. Thus irrigation water is considered a contaminant (creates a health hazard) rather than just a pollutant (is objectionable in color or odor). What's in irrigation water? How about toxic chemicals (fertilizers, pesticides, etc.) and animal waste? (Not that I want to gross you out, but every day millions of dogs lift their legs in a fond salute to their favorite sprinkler head!) These things can and WILL come back up your irrigation pipes and into your drinking water if you don't stop them. If you have a well they can go down your well and into everyone else's drinking water.  If you are on a community water system they could go back up into the pipes and poison your neighbors. The valves that turn on and off your irrigation system are not sufficient to stop backflow. The purpose of the backflow preventer is to protect you when the valve breaks or leaks, which all valves will do eventually. Saving a little money by skipping the backflow preventer will not seem so smart after you spend a small fortune on hospital bills (or funeral expenses) for a poisoned family member or pet!

Now wait a minute, some people say, doesn't the water pressure in the system keep the irrigation water from going backwards?  Yes, most of the time it does.
But there are times when the water pressure drops in the supply system, and this is when the backflow occurs.  No, it is not a frequent occurrence.  But it does
happen more often than you think.  Such as when they have to shut off the water to repair a water pipe, or hook up a new pipe.  This makes construction projects
easily the most common cause of backflow problems.  Fire fighting is another common cause of backflow.  Fire trucks use huge pumps to suck the water out of
the fire hydrants. This often causes the water pressure in the water system to drop, and backflow will occur in the surrounding neighborhoods.  You can do a quick experiment yourself and create backflow.  Simply tun off the water valve leading to your house.  Next have someone turn on a faucet.  Now turn on a different faucet that is higher than the first.  You will hear air being sucked into the higher faucet.  You just created backflow in your house piping.  Pretty easy, wasn't it?

Another common argument against the need for backflow preventers is that if all the valves are closed the water can't go backwards through them.  So the valves
will prevent backflow.  The obvious problem with this is that if the backflow occurs at a time when the valve is open, the valve will not stop backflow!  But even when the valve is closed it may not prevent backflow.  A standard manually operated valve will stop backflow when it is closed-- if the valve if fully closed, has good seals, and does not leak.  However most of the automatic valves, such as the electric solenoid valves used for irrigation systems, will not stop backflow even when fully closed.  This is because these valves are directional in design, if you look on the valve you sill see that it has an arrow on it showing the flow direction.  If the flow is reversed, the valve will not completely close and will leak (that's why the valve has the arrow on it to warn you not to install it backwards.)  Thus when backflow occurs and the flow direction reverses, an automatic valve will not stop the backward flow.

Commercial/Business: The reason why business are required to have an assembly is because they too have the potential to contaminate the drinking supply.  See above for more info.  Many businesses must have backflow prevention. Common examples are manufacturing and processing plants, medical facilities, laboratories (including school chemistry and biology labs), and buildings that have boilers, fire sprinkler systems and irrigation systems.
​HOW OFTEN DOES THE BACKFLOW PREVENTION ASSEMBLY NEED TO BE TESTED?
​In order to ensure the proper operation of a backflow prevention assembly, it must be tested and certified upon installation and at least once a year thereafter by a certified backflow tester.  Advanced Connections, LLC / Ian L. Tuttle is on the list of approved backflow testers for the City of Tallahassee, Sopchopy, Talquin Electric and Perry.  The water provider will inform you, usually through the mail, that your annual backflow prevention assembly testing is due again.  If you have any specific questions you can call the number on the mailing or contact us.

For the City of Tallahassee the due date for a test is not based on the last time it was tested but rather when it was orginally installed and tested.  If you receive a late notice a test may be requested again before a 12 month period has lapsed (after this test we are currently doing for you).  We will inform you of your due date when we leave you a copy of your test.

Talquin Electric Co-Op (Crawfordville, FL) is due a test usually in August-October.  But in 2012 the due date was October-November so occasionally the due date varies year to year.

Sopchoppy is usually due January-March.

Perry is usually due March-April
​Do I need to be present to have the assembly tested?
​No.  In most cases the backflow prevention assembly is located outside near the water meter.  We do not need to come inside in order to complete the test.  If we do need you to be there we will call you and arrange a time that will work best for you.  You'll know we've been there because we will leave you a copy of the test report for your records and  invoice.
​When and how do I pay for the test?
​You can pay when you schedule your test or after the test has been performed.  We will leave you an invoice as well as a copy of your test report (for your records) when we test your assembly.  PLEASE NOTE:  We do not file your test report with your water provider until full payment has been received.

We have several convenient options for you to pay:
- Pay online through our website.  Make sure you include your invoice number in the memo area as well as the testing address if possible.
- Mail a payment to Advanced Connections, LLC at109 Hollywood Way, Crawfordville, FL 32327.  Please be sure to include your invoice number on the check to ensure we credit the payment to the proper account.
- E-Bill/Bill Pay feature with your bank to send the payment. Make sure you include your invoice number in the memo area as well as the testing address if possible.
​Who files the test/certification report?
We will file the appropriate paperwork with the water provider as part of our service. We will also provide you with a copy of the test report for your records.  Your report will be filed as soon as we receive payment for the test and/or other services or repairs.  PLEASE NOTE: The test report will not  be filed until full payment has been received.
​How do I know if my report has been filed?
In most cases your water provider will not notify you when they receive the certification/test report.  We do not notify you when we have sent the certification/test report to the water provider.  Most water providers will send a second notice if they have not received an annual certification report.  So if you do not receive a second notice you will know that the report has been turned in to the water provider.  If you are unsure, you can always call your water provider and ask if they have received a report.
​What if my assembly fails (does not pass) the test?
​If the assembly does not pass the test it will need to be repaired.  In some cases, depending on the age of the assembly and other circumstances, it may need to be completely replaced.
​How will you inform me if my assembly fails?
We will  leave you a note informing you the reason(s) why the assembly has failed.  Depending on the location and area we will also leave you a quote for the anticipated repair.  NO WORRIES!  NO REPAIR WILL BE DONE UNTIL WE HAVE SPOKEN AND HAVE RECEIVED YOUR APPROVAL.  We have been certified to repair backflow preventer assemblies  through the University of Florida's TREEO repair course.
Why would my assembly fail the test? ​
There are several reasons why the assembly can fail.  One reason is that the rubber components inside have worn out and need to be replaced with new parts.  The rubber parts inside the assembly are a lot like your car tires.  They are moving back and forth and are pressing against a hard surface and over time they lose there ability to completely seal and prevent backflow from occurring.  Sometimes the age of the unit itself could be a cause for test failure.   Another common cause is freeze damage or broken components inside the assembly.  Frequently, the cause is simply debris in the line which prevent the assembly components from sealing properly.  Depending on the type of assembly you have, if it is failing because of debris, we will go in and clean the unit out, flip the check rubbers over (to use the other side), flush the pipes out (to remove any other debris in the line) and re-test at no additional charge.  Most of the time, in this case, a good cleaning removes the debris and the unit will pass.

HERE ARE SOME IMAGES OF PARTS CAUSING BACKFLOW PREVENTERS TO FAIL.​ 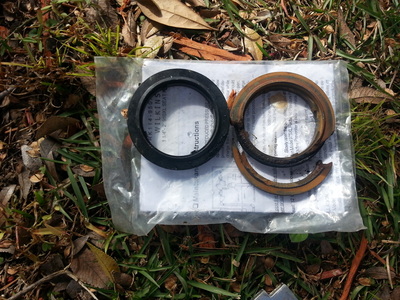